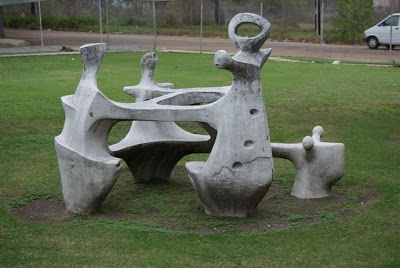 Designed by Curtis and Davis and completed in 1954, Lafon was nationally hailed as a model in progressive school design. The building stands at 2601 Seventh Street at the former center of the Magnolia Street Housing Project, recently demolished to make way for the Harmony Oaks housing development. Though the school was in operation until Hurricane Katrina and did not flood, from the outset the Recovery School District has been adamantly opposed to its reopening and has sought FEMA money to raze the building. This proposed use of federal funds for demolition has triggered the Section 106 process as established in the 1966 National Historic Preservation Act. The act requires that properties to be affected by such plans be evaluated for their historic worth to mitigate harmful affects to significant structures. Lafon was deemed eligible for the National Register of Historic Places last June by FEMA and the State Historic Preservation Office, embroiling the building in further controversy as interested parties lobby either for or against its demolition.
Unfortunately, the question of Lafon’s preservation has been rendered virtually obsolete by a bizarre twist of fate taking most of those involved by complete surprise. Recent research has shown that the building stands on land once occupied by Locust Grove Cemeteries #1 and #2, roughly active from the 1860s through the 1890s. Though it seems that some bodies were relocated prior to the construction of the first Lafon School in 1905, historic accounts and recent archaeological work indicate that remains are still interred on the site. This brings into play the Louisiana Unmarked Burial Sites Preservation Act and the Louisiana Cemetery Act. These dictate that the site not be used in any way inconsistent with cemetery use, though oddly enough, precedents have been set for using unmarked cemetery lands as parks or playgrounds. Lafon could legally be converted into a mausoleum, but current zoning laws and the wishes of Harmony Oaks’ residents make that option highly unlikely.
News of the cemetery legislation first hit in December 2009, and the March meeting was largely dedicated to reviewing the draft Memorandum of Agreement between FEMA and consulting parties. MOAs establish a course of action to be taken with a specific property; in this case, the draft outlines how Lafon cannot legally or feasibly be reused and, by default, will be demolished. Two DOCOMOMO US/Louisiana representatives were present, architect Wayne Troyer of Wayne Troyer Associates and intern Lindsey Derrington of Tulane’s Masters in Preservation Studies program. Both suggested revisions to the MOA which would soften this loss. Mr. Troyer proposed salvaging some part of the building and incorporating it into the playground which will likely be built on the site, including the preservation of the Jack Hastings climbing sculpture which was commissioned in conjunction with the school. After SHPO representatives raised concerns that the MOA called only for Historic American Building Survey-level photographs of Lafon which would not be submitted to the Library of Congress, Miss Derrington suggested that Tulane students could volunteer service hours to execute full-scale HABS drawings. Those present at the meeting were receptive to both ideas, and DOCOMOMO US/Louisiana looks forward to working with FEMA and the Recovery School District to retain as much as possible of this incredible building, and to ensure that it receives the documentation that it deserves.
Posted by Lindsey Derrington at 4:48 PM