Watch Liz Reyes of WVUE Fox 8 interview Phyllis Montana-LeBlanc and Wendell Pierce about working on HBO's Treme and the significance of saving the Phillis Wheatley Elementary School.
Posted by Francine Stock at 4:51 PM No comments:

Posted by Francine Stock at 9:06 AM No comments:

Email ThisBlogThis!Share to TwitterShare to FacebookShare to Pinterest
Labels: docomomo us, e-news

A Plea for Modernism

Hand Crafted Films, DOCOMOMO Louisiana and the Tulane School of Architecture present:
A Plea For Modernism from Evan Mather on Vimeo.
The Phillis Wheatley Elementary School has served the historic New Orleans African-American neighborhood of Tremé since it opened in 1955. Celebrated worldwide for its innovative, regionally-expressive modern design – the structure sustained moderate damage during the storms and levee breach of 2005.  DOCOMOMO Louisiana is advocating for its restoration via adaptive reuse.
A Plea For Modernism [Evan Mather, Hand Crafted Films, 2011] includes interviews with professor John Klingman of the Tulane School of Architecture, architect Wayne Troyer, John Stubbs, vice-president for field projects for the World Monuments Fund and author/actress Phyllis Montana-Leblanc, a former student of Phillis Wheatley.  It was written by Francine Stock and Evan Mather and narrated by actor Wendell Pierce (HBO's The Wire, Treme).


Mayor Mitchell Landrieu, City of New Orleans (504) 658-4900
Superintendent John White, Recovery School District (504) 373-6200
Superintendent Darryl Kilbert, Orleans Parish School Board (504) 304-3520
In taking these steps, we affirm the significance and diversity of our architectural and cultural heritage and our desire to rescue the future from the past.

Posted by Francine Stock at 5:46 PM No comments:

New Orleans Regional Modernism is available on the App Store!

DOCOMOMO Louisiana and Tulane University are pleased to present: 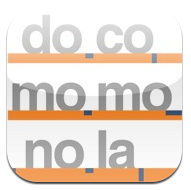 The New Orleans Regional Modernism app is designed to highlight the significant, threatened and lost modern architecture of New Orleans. It is a project of Tulane University and DOCOMOMO US/Louisiana, a regional chapter of an international committee dedicated to the documentation and conservation of the buildings, sites and neighborhoods of the modern movement.

This location-based app allows you to browse modern buildings in New Orleans by architect, neighborhood, category or status (extant, threatened or razed). Three tour routes have been identified:  St. Charles Avenue Streetcar, Canal Streetcar, and the 2011 Modernism in New Orleans tour led by Francine Stock and Keli Rylance for the Society of Architectural Historians.

We are grateful to Tulane Libraries' Southeastern Architectural Archive, the Tulane School of Architecture's New Orleans Virtual Archive, the New Orleans Public Library's City Archives, and to many students and friends for providing photos. Descriptions of buildings were written by DOCOMOMO members, students in Francine Stock's Regional Modernism class at Tulane School of Architecture, and Karen Kingsley, author of Modernism in Louisiana.

This software was designed and is supported by the Innovative Learning Center, a division of Tulane Technology Services.


To contact the local chapter about this app or to submit a building for inclusion, email: docomomo.neworleans@gmail.com

Posted by Francine Stock at 2:47 PM No comments:


You can download the exhibition guide here.
Posted by Francine Stock at 2:35 PM No comments: 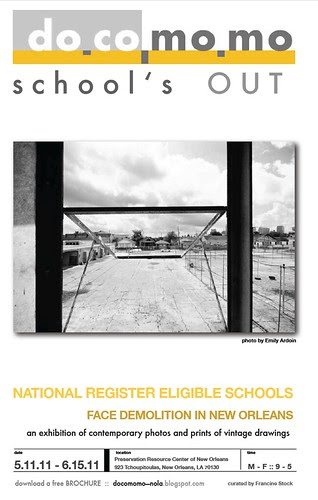 SCHOOL'S OUT: an exhibition of photography and architectural drawings of National Register eligible schools facing demolition in New Orleans