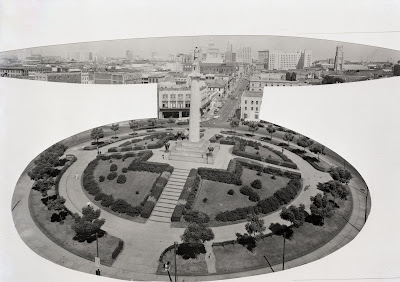 Posted by Keli Rylance at 1:55 PM No comments:

Posted by Francine Stock at 11:53 AM No comments:

Email ThisBlogThis!Share to TwitterShare to FacebookShare to Pinterest
Labels: docomomo us 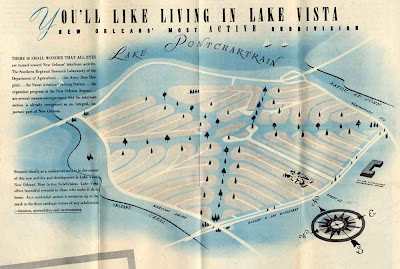 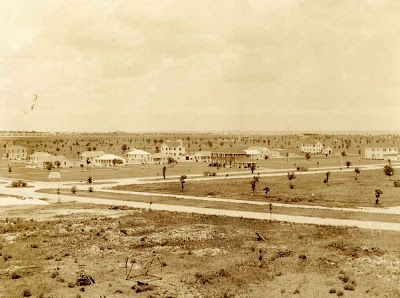 In the late 1930s, New Orleans architect Douglass V. Freret was commissioned to design a series of homes for the new Lake Vista subdivision. These modest residences were clustered along Egret Street/Hydrangea & Nasturtium Lanes and were "modern interepretations of the Colonial Cottage."

Built on a double lot in 1955-56, this spacious home was planned to provide light, privacy, and serenity for the Shaletts and their two active boys. Now one of the sons occupies it with his wife and their two sons. Before the levee was raised in 1987, all rooms on the north side enjoyed a view of the lake.

Of brick and cypress, the fence dividing the house from the street was placed well inside the property line to leave room for magnolia trees outside. The architect’s goal was to create a “controlled environment house”; this is particularly evident in the pool area, which originally had an Oriental look, including a manicured rock garden and sculptured ornamental bushes and trees. Since the original owner was active in civil aviation, the second floor roof can accommodate a helicopter landing pad. A full-sized elevator shaft is besides the “Poodle Tree”. The outside sculpture is by Joe Carmichael, and the Shaletts added the cabana bath house in 1964. The right wing of the home is the adults’ retreat.

Here the shower area and the lighting systems have been modernized by the younger generation, but the chaises longues are original. Now almost forty years old, the carpet, the drapes and all the furniture except the cantilevered glass table were in the house when the Shaletts moved in. The turquoise wall is a composite stone material. The use of structural steel permitted a large ceiling that rises two stories in the living room.

In the boys’ room the exterior brick wall continues, adding a rugged feel. The bathrooms are scaled for children. Because the architect was intrigued by the relationship of exterior and interior spaces, patios framed the family room on two sides. The smaller patio has been converted to a small library. A hidden doorway allowed access to the housekeeper’s suite ( now an office). The dining room furniture is also original. Over the table is a dome intended to increase the feeling of openness. It let in too much heat, however, and was painted over. The rice paper screen fits well with the Oriental style garden outside. Planned for an era when the kitchen was the maid’s domain, the last room on the tour has seen much modernization. Changes, supervised by Albert Ledner, included the removal of a pantry and the introduction of bright colors in the laminated cabinet doors and tiles.

This home, built in 1956-57, reveals the genius of John Lawrence, a former Dean of the Tulane School of Architecture and a proponent of the view that “ good modern architecture is not a set of standard forms... it is an architecture which welcomes the entire range of building materials.” A native of Louisiana, Lawrence incorporated elements of traditional local architecture as well.

Beginning with a fairly small wedge-shaped lot, he created a feeling of spaciousness by aligning the two wings of the home with the edge of the lot and by creating walls of glass that open onto a park-like view that then included Lake Pontchartrain.

Lawrence believed that building facades should not overwhelm a neighborhood. In this case the shape of the lot militated against that excess. From the street only the carport and an iron grille are visible. The carport bears a flat roof, a hallmark of International-Style inspired buildings.

Each of the two wings has a different function and feel. The cozy bedroom wing includes two baths with their original tiles and fixtures and the two bedrooms with glass walls. The utilities, housed at the other end of the wing, form a separate unit. In the larger wing, dedicated to public life, interior walls are partitions that do not obstruct the view of the roof, which seems to defy gravity, rising to 18 feet. A bank of skylights enhances the openness. Storage space lines the bedroom hall, dining room and kitchen. The Decorative elements are subtle and carefully chosen. Molding, of either wood or plaster, is absent. Doors are generally unadorned; exceptions include the sliding door between the den and the entrance hall and the metal grille work. The massive fireplace and its matching coffee table, of Travertine marble, were designed by Lawrence.

The home complements the owners furniture and art collection dating to the Art Deco period, the 1940’s through 1960’s, and the contemporary era.

This home blends antique and contemporary, delicate windows and massive curving surfaces. Mrs. Galatoire spent much of her life collecting components from buildings slated for demolition, and the architect took up the challenge of incorporating them into a coherent home.
The entry drive and courtyard are paved with cobblestones from the site of the International Trade Mart, and the courtyard features an antique three-tier iron fountain in a reflecting pool. Arched fan doors from the Garden District home of Josephine Louise Newcomb serves as the entrance.
Mrs. Galatoire’s collection of windows from the Good Shepherd Convent (built in 1866 at Bienville and Broad Streets for the care of delinquent girls) includes the arched windows that form the front of the house and eleven stained glass ceiling fixtures. To the right of the entryway is a guest suite. The bath features a Portuguese carved door dating to the mid-eighteenth century, collected from the home of Archbishop John Shaw. Bronze faced window benches with antique tiles from the Shaw house are seen in the bedroom, living room and television room.
Stone is important in this home. The downstairs floor is white marble, and several bathrooms include marble as well. The circular wall behind the dining room and living area is of granite. The curving lines of the building are particular striking as the balcony passes through the arched windows upstairs. Equally compelling is the view of Bayou St. John. The back stairway is also an exercise in curves. It spirals tightly, and the newel post is a series of stacked balls.
Mrs. Galatoire’s eclectic tastes are evident in the kitchen: the cooking island, crafted from a single brass column, was once the service counter of a downtown bank. An antique door of glass and metal is from Spain.
More recent owners have added a memento from another chapter in New Orleans history: the Floating Leaves from the 1984 World’s Fair Wonder Wall, designed by Kent Bloomer of the Yale Art Department.

Designed in 1963 and dedicated in 1966, this church is noted for its striking roof, rising in orchestrated planes from almost ground level to more than 75 feet above the church floor. The three lower vaults follow the aisles to entrances, and the two massive vaults shelter the seating areas. To create a feeling of space without too much height, the architects used low walls that support the enormous roof, creating a vortex of space that surges upwards.
The selection of materials was important in creating an elaborate structure on a modest budget. The roof is of Terne, carbon steel coated with tin and lead. the confessionals and organ chamber are walnut-faced plywood, and the pews are of red oak; both were designed for this church. The infrastructure is of reinforced concrete resting on the piers flanking the entrances, with precast concrete panels forming the walls.
Interior decoration is sparse. The doors, of simple narrow vertical panels, are of bronze over a hollow core. The architects specified the shape of the central altar, but details of its construction are unknown. Blueprints called for a tall, simple railing to surround the baptistry at the back of the church. The Stations of the Cross, by Dom Gregory Dewitt, were added after the dedication.
Stained glass windows incorporating geometric shapes, with red and blue dominating in the wall windows and yellow in the steeple window. The latter faces north so that the light is neutral and cool. The windows were probably produced by the Emil Frei studio in St. Louis.

Designed in 1963, this church is one of the earliest examples in New Orleans of a new trend in religious architecture: a circular, amphitheater orientation that brings all members of the congregation closer to the altar than did the traditional nave.
This square building is subdivided by three barrel vaults supported by ribs. Two of these vaults shelter the entrances, and the third leads to the baptistery. All three “ float” above the fiberglass roof without resting on it. The core building is of reinforced concrete, and hidden within the ribs are the air conditioning ducts. Materials are simple, and the excitement is generated by the forms. The central spire rises 80 feet, adding to a feeling of light, and the architects applied the gold leaving lining it. Note the interlocking crosses in the reredos (made of iron, brass and mahogany) and on the brick exterior facade.
The stained glass windows were produced by the same company that created the windows in the Chartres Cathedral in France, following guidelines supplied by Curtis & Davis. Those lining the vaults add to the airiness of the church, and the three at the ends of the vaults replace traditional rose windows. Their theme are the Dove, the Trinity, and the Ten Commandments.

The baptistery, although a separate room, is clearly an integral part of the church when seen from the chancel. The architects designed the baptistery railing, with its fish design, and the font is of Carrara marble.

The International Style in New Orleans, Tulane School of Architecture, 1994, copy by Patty Andrews
photo: Karen Gadbois
Posted by Francine Stock at 9:30 AM No comments:

In 1994 Tulane School of Architecture sponsored a tour, "The International Style in New Orleans" which featured six modern buildings designed by alumni and faculty in New Orleans: Nathaniel C. Curtis, Jr., Arthur Q. Davis, John Lawrence, James Lamantia, Albert C. Ledner, and August Perez, Jr. This will be the first of six posts in a series. We'll start our tour on Canal Street.