Arthur Q. Davis, FAIA, originally uploaded by regional.modernism.
I feel so very fortunate to have had the opportunity to get to know architect Arthur Q. Davis through my work at the Tulane University School of Architecture, especially in my efforts since the storm to document the modern architecture of New Orleans. In 2008 Mr. Davis graciously met with my Regional Modernism class and made a great impression on the students. He was a colorful storyteller and shared anecdotes from when he studied under Walter Gropius and Marcel Breuer and worked for Eero Saarinen, thus establishing within the room a tangible link to some of the great masters of modernism. We are now beginning to understand that Mr. Davis and his partner Nathaniel C. Curtis, Jr (1917-1997) were masters of regional modernism, committed to designing contemporary architecture relevant to our regional climate and urban fabric.

We tend to think of New Orleans architecture only in the vernacular. We tend to privilege traditional architecture over contemporary. We tend to overlook the modern architecture in our midst. But in the 1950s New Orleans was a hotbed for modern architecture and the partnership of Curtis and Davis were pioneers of the new. However the recent losses are staggering. Since the storm we have lost six significant buildings designed by Curtis and Davis - the St. Frances Cabrini Church, four schools (McDonogh 39, Thomy Lafon, Carver and Cabrini) and the Dr. Lyman K. Richardson Residence. In the past few years Mr. Davis frequently lamented that an architect should not outlive his buildings. We are blessed that the magnum opus of the firm, the recently renamed and brilliantly illuminated Mercedes-Benz Superdome, the most recognized building in the state of Louisiana, stands as a testament to the ingenuity and ambition of Mr. Curtis and Mr. Davis. 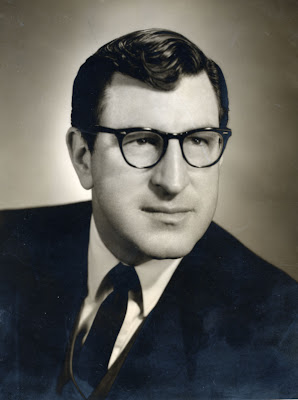 New Orleans architect Arthur Q. Davis passed away on Wednesday, 30 November 2011 at Ochsner Baptist Medical Center. A graduate of Tulane University's School of Architecture and a World War II veteran, Davis studied with Walter Gropius and apprenticed in Eero Saarinen's Michigan office.
In 1947, Davis received an offer from another Tulane alumnus -- Nathaniel C. Curtis, Jr. (1917-1997) -- to establish a joint practice in New Orleans. The Curtis and Davis partnership lasted nearly thirty years, and its Modernist buildings were once pervasive throughout the Crescent City. Structures such as Thomy Lafon Elementary School (razed 2011), the Rivergate Convention Center (razed 1995) and the Superdome garnered international attention. Journals such as Progressive Architecture, Architectural Forum and Architecture d’aujourd’hui highlighted the firm’s notable buildings, a long list that came to include projects in Germany, Vietnam, and Saudi Arabia.
In 1978, the firm was acquired by the West Coast engineering and architecture office of Daniel, Mann, Johnson, and Mendenhall (DMJM). Davis worked with DMJM for twenty years, and then established his own firm, Arthur Q. Davis FAIA and Associates, in 1998.
In 2009, Mr. Davis published a memoir, titled It Happened by Design: The Life and Work of Arthur Q. Davis, which summarizes his career and his reflections on the profession. He was working on a history of the Berlin Medical Center at the time of his death.
Image above: Frank Lotz Miller, photographer. Arthur Q. Davis, Architect. Curtis & Davis Office Records, © Southeastern Architectural Archive, Special Collections Division, Tulane University Libraries.
Posted by Keli Rylance at 8:48 AM No comments:

Modernism Along the Avenue: A Bicycle Tour

DOCOMOMO NOLA is proud to partner with AIA New Orleans to present Modernist Architecture Along and Around St Charles Avenue: A Bicycle Tour.

This unique architecture tour of notable and noteworthy Modern architecture buildings along Saint Charles Avenue will begin at 2pm at AIA New Orleans Center for Design, on Lee Circle, and culminate with a reception at the residence of architect Marcel Wisznia - a House of Tomorrow (1936, Moise Goldstein, architect, Nathaniel Cortlandt Curtis, designer).

Note - this is a 'one-way' tour, beginning at Lee Circle and ending in Uptown, by Audubon Park.

This tour is dedicated to the  memory of architect and historian Samuel Wilson, Jr. in honor of the centennial of his birth. We are especially grateful for Wilson’s seminal survey of 20th-century architecture in  A Guide to Architecture of New Orleans 1699-1959.

Schadler Building (threatened), originally uploaded by regional.modernism.
Th Schadler Building on Tulane Avenue's "Miracle Mile" is threatened with demolition due to its location within the LSU hospital footprint.

Alfons Schadler acquired the site from the Hartwell Estate to construct a new headquarters for his Southern Radio Supply Company (est.1932).

The two story air conditioned building included a "high fidellity sound room," a 2000 SF showroom and 4000 SF of office space. It was designed by architect John M. Lachin, Jr. and constructed in 1956 by Otis W. Sharp and Sons, contractors.

Posted by Francine Stock at 1:02 PM No comments:

Email ThisBlogThis!Share to TwitterShare to FacebookShare to Pinterest
Labels: docomomo us, e-news

The McDonogh 36 Elementary School / renamed Mahalia Jackson Elementary (Charles Cobert and Sol Rosenthal, 1954) is the sole survivor of the the thirty modern public schools built in New Orleans in the 1950s.

The school was renovated by architect John C. Williams for a non-profit foundation and re-opened in 2010 as the Mahalia Jackson Early Childhood Family Learning Center. During renovation, the facility was stripped bare to the concrete and steel structure, shedding years of unsympathetic alterations and redundant mechanical systems. The form is a fusion of a ‘finger plan’ school with a double galleried plantation house. Mature live oaks inhabit the courtyards between the wings.

The renovation includes walls of operable windows and maintains the open air circulation gallery. The new program is brilliant and the renovation reminds us how modern school facilities could be retrofitted to serve the community in new ways if only given the chance.

AIA New Orleans is hosting a FREE tour of the Mahalia Jackson Center on Thursday, July 21. Please visit the AIA website to register.

Posted by Francine Stock at 9:49 AM No comments:

Wheatley Elementary School was a perfectly fine building: Letter to the editor

Architect Raymond Boudreaux worked with Charles Colbert in the Office of Planning and Construction for Orleans Parish Schools and later in the firm Colbert Lowrey Hess and Boudreaux.
His letter to the editor dated June 24, 2011 was  published on July 7, 2011 in the Times-Picayune.

Posted by Francine Stock at 8:46 AM No comments:

Posted by Keli Rylance at 10:02 AM No comments:

Email ThisBlogThis!Share to TwitterShare to FacebookShare to Pinterest
Labels: announcements, docomomo us, newsletter

Dear Friends of DOCOMOMO-US/LA,
We regret to convey that Charles Colbert's lauded Phillis Wheatley Elementary began to be demolished on Friday 17 June 2011. Hannah Miet has covered the story for the Times Picayune. The structure is still standing, although battered by neglect and preliminary demolition work.
In this video clip from nola.com, former Phillis Wheatley Elementary student Phyllis Montana-LeBlanc, an actor and preservationist, witnessed the bulldozing. She has been a powerful advocate for saving the building. As we reported earlier this week, The Roots of Music envisioned renovating Phillis Wheatley School as the new headquarters for its nationally acclaimed youth program. DOCOMOMO-US/LA supported this proposal, canvassing Mayor Mitch Landrieu and new RSD Superintendent John White with pleas to preserve the innovative structure -- the site of historically significant music education programs -- for adaptive reuse. Despite such efforts, on 16 June, DOCOMOMO-US/LA supporters received letters advocating demolition from Mr. White, and bulldozers circled the next day.
While we are greatly saddened by this news, we want to convey our sincere thanks to all of you who lent your support!
Posted by Keli Rylance at 7:25 PM No comments: 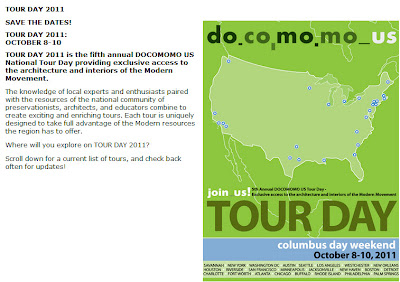 For this year's DOCOMOMO-US Tour Day Event, DOCOMOMO-US/LA is planning a special tour of modernist buildings on St. Charles Avenue. For a quick preview of some of the tour sites, check out Regional Modernism on flickr. For other cities' tour destinations, see the DOCOMOMO-US "Tour Day" page here.
Posted by Keli Rylance at 5:30 PM No comments:

A Modern Proposal :: The Roots of Music Center at Phillis Wheatley

A University of Virginia Proposal for the Renovation and Adaptive Reuse of the Phillis Wheatley Elementary School.

DOCOMOMO US/Louisiana is proud to stand with The Roots of Music and support their vision of the renovation and adaptive re-use of the Phillis Wheatley School as the new headquarters for their nationally acclaimed youth music program.  This proposal for the Roots of Music Center at Phillis Wheatley honors the continued legacies of educational innovation and preservation in New Orleans. Join us in supporting this synthesis of visionary architecture and musical education in the heart of the Treme.
Please email your support for this proposal to Recovery School District Superintendent John White and Mayor Mitchell Landrieu. This is our last chance to dance!
john.white@rsdla.net
mayor@nola.gov
Posted by Francine Stock at 12:40 AM No comments:

Email ThisBlogThis!Share to TwitterShare to FacebookShare to Pinterest
Labels: Phillis Wheatley Elementary, The Roots of Music

Phillis Wheatley and The Roots of Music

For the Roots of Music from Jack Cochran on Vimeo.

from Filmmaker Jack Cochran, University of Virginia, School of Architecture:
The film documents my studio’s trip to New Orleans this past September, where we met with The Roots of Music, a non-profit music education program in need of a larger facility to accommodate the high number of students currently on their waiting list.
Posted by Francine Stock at 8:49 PM No comments: 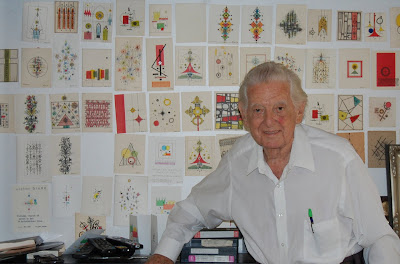 New Orleans modernist Victor Bruno passed away on Sunday 5 June after a prolonged illness. A graduate of Alcée Fortier High School as well as Tulane University (BA Science & Engineering 1943; MA Architecture 1947), Mr. Bruno was especially noted for his residential buildings.
The child of Tunisian immigrants, Bruno apprenticed in his father's cabinet-making shop before pursuing studies in architecture. Frank Lloyd Wright's work proved such a significant inspiration to Bruno that he followed the Prairie School architect's advice that one needed to build to really be an architect. Bruno's earliest post-graduate professional work was as a contractor-builder rather than as architect per se. After working for Blue Plates Foods contractor Lionel J. Favret, Bruno established his own architectural practice. Projects such as the Gallery Apartments (2511 St. Charles Avenue; 1962) garnered regional acclaim.
Recently, DOCOMOMO-US/LA President Francine Stock visited the architect in his Fontainebleau Drive home, where he posed with a series of holiday cards he designed over a sixty-year period [detail shown above]. To see more photographs, consult her Regional Modernism flickr set here; to read John Pope's Times Picayune obituary, click here.
Posted by Keli Rylance at 12:34 PM No comments:

SAVE PHILLIS WHEATLEY ELEMENTARY SCHOOL IN NEW ORLEANS! SAY "NO!" TO DEMOLITION

has over 1900 signatures. I encourage you to sign the petition AND email a letter of support for preservation of Phillis Wheatley Elementary School to the following.

John White, Superintendent of the Recovery School District  john.white@rsdla.net
Mayor Mitchell Landrieu  mayor@nola.gov
Scott Hutcheson, advisor to the Mayor on the cultural economy  cshutcheson@nola.gov
THANK YOU!
And stay posted for an update soon!
Francine Stock
president
DOCOMOMO US/Louisiana
Posted by Francine Stock at 11:53 AM No comments:

Watch Liz Reyes of WVUE Fox 8 interview Phyllis Montana-LeBlanc and Wendell Pierce about working on HBO's Treme and the significance of saving the Phillis Wheatley Elementary School.
Posted by Francine Stock at 4:51 PM No comments:

Posted by Francine Stock at 9:06 AM No comments: