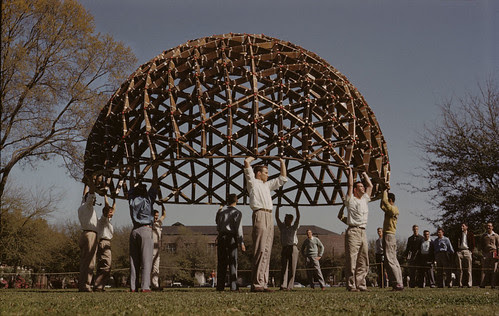 TSA Geodesic Dome project 01 1954, originally uploaded by regional.modernism.
Buckminster Fuller (1895-1983) served a six-week term as visiting critic at Tulane School of Architecture in February and March of 1954. Fifth-year students worked with Fuller to create this 18 foot geodesic dome model of a potential shelter or airplane maintenance hangar for the Marines. Here students raise the lightweight yet sturdy model on the quad of Tulane's front campus.

The Tulane geodesic dome model was constructed of cardboard formed into triangles, painted with plastic and joined with tape. According to an article in the April 1954 edition of The Tulanian, the dome was to be packaged and sent to the military base at Quantico, Virginia accompanied by Dean John Ekin Dinwiddie and several students. They would reassemble the model there for military inspection and it would soon undergo mass production.

I am not sure if the geodesic domes ever went into military production. However in 1958 Fuller returned to Louisiana to construct the Union Tank Car Dome outside Baton Rouge. Upon completion the 384 foot diameter dome was the largest clear span structure in the world and the largest structure of its type.

A NECCESSARY RUIN: THE STORY OF BUCKMINSTER FULLER AND THE UNION TANK CAR DOME