A Necessary Ruin: The Story of Buckminster Fuller and the Union Tank Car Dome

A Necessary Ruin: The Story of Buckminster Fuller and the Union Tank Car Dome, originally uploaded by regional.modernism.


Upon its completion in October 1958, the Union Tank Car Dome, located north of Baton Rouge, Louisiana, was the largest clear-span structure in the world. Based on the engineering principles of the visionary design scientist and philosopher Buckminster Fuller, this geodesic dome was, at 384 feet in diameter, the first large scale example of this building type. A Necessary Ruin relates the powerful, compelling narrative of the dome’s history via interviews with architects, engineers, preservationists, media, and artists; animated sequences demonstrating the operation of the facility; and hundreds of rare photographs and video segments taken during the dome’s construction, decline, and demolition. (Evan Mather, U.S.A., 2009, 29:54)

Efforts to preserve and reuse Phillis Wheatley Elementary constitute what is arguably one of the most pressing preservation issues facing New Orleans today. Designed in 1954 by New Orleans architect Charles Colbert, FAIA, it is a groundbreaking work of modern engineering and design. Though its cantilevered classroom wing avoided the ravages of flooding after Hurricane Katrina, the Louisiana Recovery School District (RSD) is pushing for FEMA funds to demolish the National Register-eligible building.

According to the National Historic Preservation Act of 1966, any such use of federal dollars to demolish or otherwise alter a building must first be subject to the Section 106 review process to determine how such actions can be mitigated through discussion with concerned parties. FEMA began Wheatley’s Section 106 review last fall and the issue erupted into a contentious fight between those for and against preservation. The RSD halted the process to commission the Hammond, LA-based firm of Holly + Smith to perform a feasibility study for the site. Its findings were made public at an RSD-hosted community meeting on July 21st, while the official consultation process resumed July 29th.

Holly + Smith considered two options for the site, total demolition and replacement with a new school building versus restoration of and addition to the historic building. The firm was not charged with formally designing either scenario, only with assessing current conditions and proposing hypothetical schematics. It found that both options were comparable in most respects, though estimated that the renovation scenario would cost an additional $900,000. The architects neglected to calculate how demolition costs would help to close that gap, but either way, the project would cost between $20 million and $21 million. RSD officials have asserted that either scenario would be completed by 2013.

Despite these findings, detractors still maintain that Wheatley must come down. The RSD claims that it would be impossible to achieve an ideal learning environment for students using the existing building, and some echo this sentiment by insisting that the only way to achieve parity with other public schools would be to construct an entirely new building. These arguments seem somewhat disingenuous in light of the fact that the district already plans to renovate a diverse collection of forty-four existing school buildings, historic or otherwise. If it is possible to bring each of those to a reasonable level of programmatic equality, one is left to wonder why the rehabilitation and reuse of Wheatley is so insurmountable, particularly in light of those conclusions drawn by the RSD’s own consultants.

Additional arguments against preservation come from those attributing a host of educational and social ills to the building itself. Wheatley was poorly maintained for decades, and prior to Hurricane Katrina it, like most of New Orleans’ public schools, was failing. Overall mismanagement was, after all, what spurred state takeover of the city’s school system by the RSD in the first place. These problems were endemic citywide, not unique products of Wheatley’s design. Others claim that the building, completed the same year as the historic Brown v. Board of Education Supreme Court ruling, painfully encapsulates the era of segregation in New Orleans and therefore should be demolished to start anew. One wonders then why those same detractors are not arguing for the demolition of all of the city’s historic school buildings, the vast majority of which were completed prior to World War II; the answer likely lies in the fact that these are mostly Classical Revival style structures which are more widely accepted as “historic.” In either case, these arguments reveal a disturbing brand of selective memory on the part of those seeking demolition most ardently.

Holly + Smith’s feasibility study, which states that Phillis Wheatley Elementary is a viable resource, should be seen as a positive starting off point for creative solutions to satisfy all. Those arguing for preservation – including DOCOMOMO/US Louisiana, Preservation Resource Center of New Orleans, National Trust for Historic Preservation, World Monuments Fund, and citizens throughout New Orleans – believe that this historic building can indeed be incorporated into a 21st century school to benefit children for years to come. After all, that is the ultimate goal of preservation – to insure that future generations will inherit the architectural legacy of those who came before, rather than allow short-sighted thinking to deprive them of that opportunity.

Posted by Lindsey Derrington at 5:11 PM No comments: 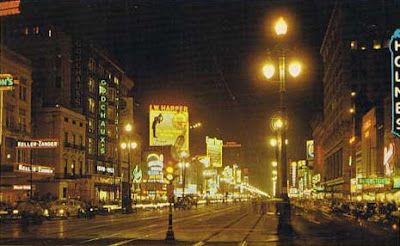 The Preservation Resource Center's Advocacy Department has announced that the Walgreen's Pharmacy located at 900 Canal Street has applied to the Historic District Landmarks Commission to replace its Moderne neon signage with LED (light-emitting diode) signage.

Louisiana governor Huey Long’s favorite firm, Weiss, Dreyfous & Seiferth, designed this pharmacy (1938) as well as the State Capitol (1932). The Moderne pharmacy is illuminated by its original neon sign. The year of the structure's completion, Canal Street was awash in neon lights and colored paving:

“A breadth of 171 feet is distributed between two spacious sidewalks, and a wider neutral ground; both the sidewalks (called banquettes in New Orleans) and the neutral ground are paved in modernistic style with red and white terrazzo marble, reflecting the brilliant sunlight by day and the flood of electric lights by night.” (WPA Guide to New Orleans, 1938)

From the 1930s-1960s, Canal Street’s signage was almost exclusively neon (undated postcard shown above). Today, very few of its historic neon lights survive. To see other pictures of the signage and comment on the proposal, click here.

Many of the Big Easy's Midcentury Buildings Face Demolition.

Credit: Trevor Meeks
The year is 1955; the place, New Orleans. Progressive Architecture magazine has just held its second annual Design Awards, juried by Bauhaus School founder Walter Gropius. The list of winners brings a surprise: New Orleans and Louisiana capture six of the awards—more than any other city and state in the nation. The awards recognize the work of five different architectural teams, including the noted firm Curtis and Davis, whose later work will include the 1975 Superdome.
read more.....
Posted by Francine Stock at 11:13 AM No comments: