Intelligent Design with Principles of Sustainability and Modernism in Mind 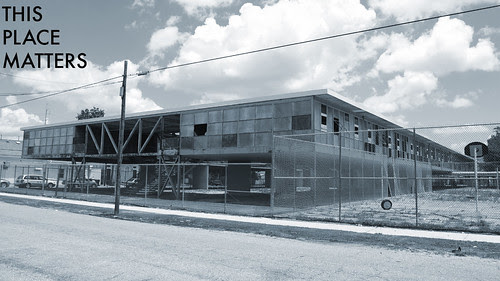 The Phillis Wheatley Elementary School is already elevated above the 100 year flood elevation - one of the most important factors for any building located in the city. Even though the classrooms did not flood after Hurricane Katrina, the school has remained shuttered for five years.

The open design of the building adds to the positive learning environment by creating an unrestricted open air feel. The original design utilized a beautiful glass wall exterior to allow large amounts of natural light into the classroom. Natural light has since been proven to aid in the learning process and combat depression.

The boarded window downgrade was likely to combat the heat element. However, since then glass and window construction tech has drastically improved so that double and triple pane Argon filled panels could be utilized to to reduce heat transfer yet retain the architectural beauty of the original design.

Due to the large flat roof and large glass windows, electricity needs could be subsidized through the use of solar panels. This is a vital point, since New Orleans is one of the largest solar cities in America and mid-century pieces were designed to be easily upgraded as technology advanced.

This unique school facility provides abundant sheltered play space, natural light and ventilation. Supports are in the middle of the building. The extensions are cantilevered about 35 feet from the supports - a very muscular kind of support, more often seen in bridge design. The elevated structure has a regional architectural sensibility. The earliest buildings of the French Quarter and around Louisiana were all elevated, not just for flood protection, but also to increase natural ventilation. The breeze is always a little bit stronger when you get above ground.

Posted by Docomomo New Orleans at 2:41 PM No comments: 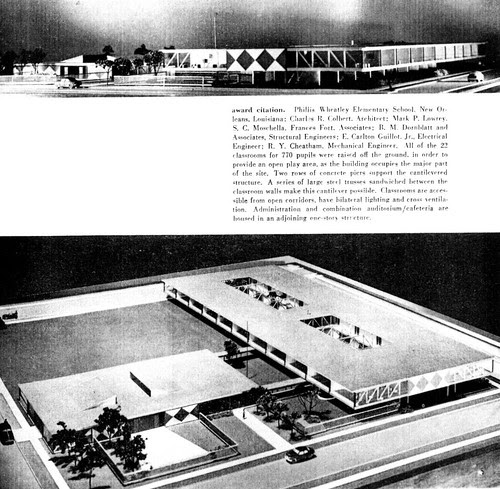 
All of the 22 classrooms for 770 pupils were raised off the ground, in order to provide an open play area, as the building occupies the major part of the site. Two rows of concrete piers support the cantilivered structure. A series of large steel trusses sandwiched between the classroom walls make this cantilever possible. Classrooms are accessible from open corridors, have bilateral lighting and cross ventilation. Administration and combination auditorium / cafeteria are housed in adjoining one-story structure.

The Futurist on Film 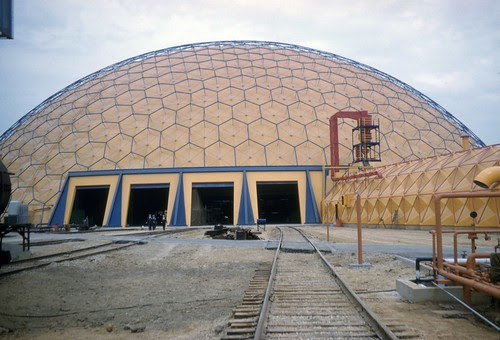 I recently watched Evan Mather's A Necessary Ruin (Handcrafted Films 2009). When the Union Tank Car Dome outside Baton Rouge was completed in 1958 it was the largest clear span structure in the world. This futurist dome was no longer in use and had been abandoned. The Foundation for Historical Louisiana fought for its adaptive reuse, even suggesting that it could be moved to an alternate site. However, the dome was demolished in the secret of night in November 2007, just shy of its fiftieth birthday.

In September DOCOMOMO US/Louisiana will present A Necessary Ruin in a special screening. Date and location to be announced.
Posted by Francine Stock at 2:34 PM No comments: