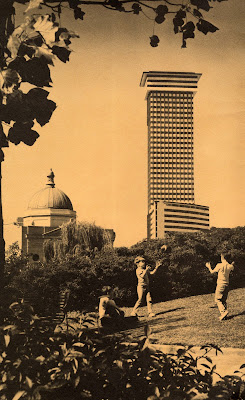 In 1968, the Gravier Latter and Blum Office distributed an advertising brochure for potential Plaza Tower tenants:

"This imposing structure that soars 45 floors above downtown New Orleans is The Plaza Tower, Office/Residence building scheduled for completion in early 1969.

Located minutes from Canal Street and the financial center, The Plaza Tower avoids the congestion and traffic of the inner city core. It is easily reached from all sections of New Orleans. . . situated at the very hub of the new expressway and Interstate systems."