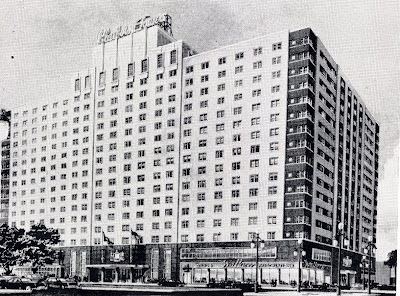 In December 1950, architects William Nowland Van Powell (1904-1977) and Henry Ehrensing (1907-1985) received attention for their design of a new luxury apartment complex to be located at the intersection of South Claiborne Avenue and Canal Street (bounded by Cleveland and S. Derbigny). At the time, Claiborne Towers was the South's largest apartment project, with a planned 1036 units that included air conditioning. Construction of the 17-story $10 Million building had begun in April of 1950, after a lease agreement for the site was negotiated with Tulane University. By 1952, Claiborne Towers featured a beauty shop, lingerie boutique, cleaners, and a lounge on its ground floor. Its lobby was apportioned with terrazzo flooring and black walnut panels, and a mural depicting the progress of New Orleans was planned for the 62-ft wall expanse above the structure's Otis elevator bank.
Image above: National Architect Vol. 6 No. 12 (December 1950): p. 7. Tulane University Libraries.